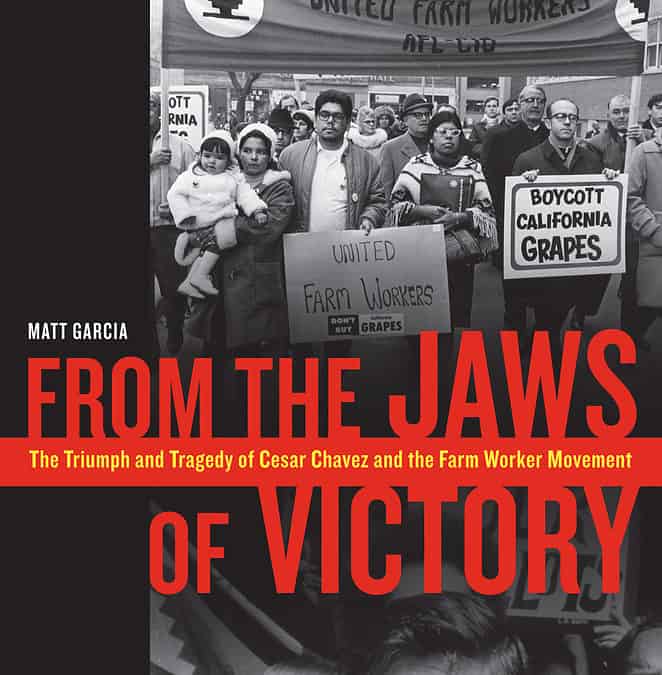 This section hosts some of the public responses to my most recent book, From the Jaws of Victory.   I include my response to some critics and an article I published in the Los Angeles Times that has drawn critical response.  I have also added links to a portion of the digital resources I used to write the book.

A response to my critics by Matt Garcia. A brief response intending to clarify the purpose of From the Jaws of Victory and address some of the concerns raised by my critics. (1/4/2013)

Success and Failures of Cesar Chavez and the United Farm Workers by Matt Garcia. An overview of major themes found in From the Jaws of Victory.

LABOR: Studies in Working-Class History of the Americas, Vol. 11, No. 2, Summer 2014 by Jefferson Cowie

It’s a Wonderful Life? Too Many Chicana/o Academics Sacrifice Needs of Community or Students for Career Advancement by Rodolfo Acuña

Utopia, Myopia, and Class Struggle in the Fields by Fernando Gapasin. A review of the book published in the December 2012 issue of the WorkingUSA: The Journal of Labor and Society.

Commentary by LeRoy Chatfield. A response to From the Jaws of Victory by an associate of Caesar Chavez.

In Response to From the Jaws of Victory. In this issue of Latino Perspectives, George H. Diaz’s letter (p. 7) to the editor addresses concerns about the book. (11/2012)

Official Junta Release by the Brown Beret National Organization. A response to my article in the Los Angeles Times and a call for boycott. (9/27/2012)

Cesar Chavez, flawed hero of the fields by Matt Garcia in the Los Angeles Times. In this article I briefly discuss the importance of understanding the shortcomings of Chavez’s decision making in order understand the broader trajectory of the Union.  (9/25/2012)

I hope that over time this section will collect some of the more relevant digital sources concerning Chavez and the U.F.W.

The United Farm Workers Grape Strike and Boycott, 1965-1970: An Evaluation of the Culture of Poverty Theory. This link takes you to the most authoritative study of the boycott by scholar and UFW veteran, Jerry Brown.  Jerry is currently Founding Professor of the Department of Global and Sociocultural Studies (formerly the Department of Sociology and Anthropology) at Florida International University.  He was co-coordinator of the UFW boycott from 1966 to 1970.  He completed the above dissertation at Cornell University for his PhD in Anthropology in 1972.